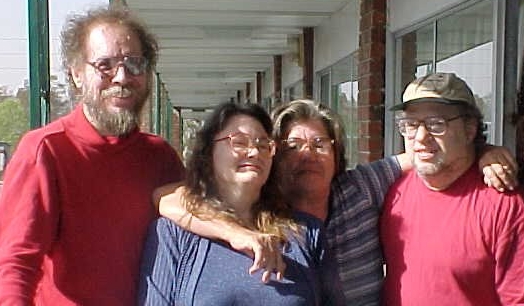 Martin Shackelford, long one of Judyth Vary Baker's most outspoken champions, is not pleased.

As supportive as Martin has been of Judyth's many tales over the years -- whether they involve being Lee Harvey Oswald's secret CIA mistress, acting as part of a top-secret government project that ultimately resulted in the creation of the AIDS virus,(1) or merely breaking up a coven of witches and exposing its head warlock(2) -- Judyth Vary Baker has finally come up with a claim that Shackelford simply cannot stomach: She supports the story promoted by the National Enquirer and then-presidential candidate Donald Trump in the spring of 2016, that Rafael Cruz, father of Senator Ted Cruz, is the unidentified man captured on film with Lee Harvey Oswald one day during the summer of 1963 in New Orleans.

"It's all nonsense," Shackelford says. "Trump and National Enquirer nonsense." He adds that he is no longer involved with Judyth, although he continues to believe her earlier claims.(3)

Moreover, he and Judyth discussed the unidentified man years ago, and she indicated that she did not know him.(4) 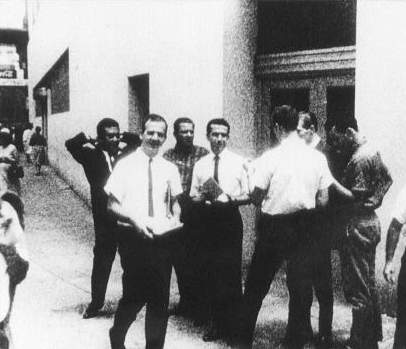 On August 16, 1963, Lee Harvey Oswald led a demonstration for the Fair Play for Cuba Committee (FPCC) outside the International Trade Mart in New Orleans. While he posed as the leader of the New Orleans chapter of the FPCC, it was actually a one-man operation.(5) On this occasion, Oswald was assisted by two men he had recruited at the local employment office. When footage of the demonstration was shown on WDSU-TV, one of the men, Charles Steele, Jr., quickly came forward to identify himself and disclaim any knowledge of or support for the FPCC -- he had simply cooperated with Oswald to make a little money.(6) The other man, while captured on newsreel footage that day, has never been identified.

The National Enquirer has run any number of stories on the John F. Kennedy assassination over the years, each one pointing the finger at a different suspect. In the heat of the 2016 Republican presidential primary campaign, the Enquirer ran a cover story claiming that the unidentified man was Rafael Cruz, father of Senator Ted Cruz, one of the many rivals for the nomination. The unlikely claim was quickly picked up by Donald Trump.

"His father was with Lee Harvey Oswald prior to Oswald's being -- you know, shot. I mean, the whole thing is ridiculous," Trump told Fox News. "What is this, right prior to his being shot, and nobody even brings it up. They don't even talk about that. That was reported, and nobody talks about it. I mean, what was he doing -- what was he doing with Lee Harvey Oswald shortly before the death? Before the shooting? It’s horrible."(7)

The April 20, 2016, National Enquirer's claim that Rafael Cruz was with Lee Harvey Oswald in a photo taken in front of the International Trade Mart in New Orleans on August 16, 1963, stirred controversy in the Republican Presidential Primary and across the Internet. It also prompted an eyewitness to speak up....

After seeing the National Enquirer article, author Judyth Vary Baker was interviewed by Kris Millegan, the publisher at TrineDay, about what she personally saw and heard that day. "I saw Rafaolo with Lee in front of the ITM. I was no more than 6 feet from him and saw him clearly, but I did not know his last name. Lee only told me his name was 'Rafaolo,' and that he was there to watch Lee's back in the event there was trouble. The cover story was that Lee hired Rafaolo to help hand out FPCC flyers, but he was really there for Lee's protection. Lee also told me that both he and Rafaolo pretended to be pro-Castro to flush out Castro sympathizers for ex-FBI agent Guy Banister," said Judyth Vary Baker in an interview with her publisher Kris Millegan this week....

"The other time I saw Rafaolo," Judyth told Millegan, "was when Lee and I were walking through Lafayette Park near Banister's office. Lee spotted Rafaolo and said, 'There goes Rafael the Archangel.' That's when Lee told me that Rafaolo was one of the Cubans whose parents were still in Cuba, so Lee could not trust him because Castro might be able to pressure Rafaolo into spying by threatening his parents."

One of the first JFK assassination researchers to vet Judyth's story when she initially appeared was Martin Shackelford. He began interviewing her and researching her story in 1999, and was the first researcher to publicize some of her claims. When Martin made a rare appearance at the "JFK - The Truth" Facebook group recently, I took the opportunity to ask him about Judyth and Rafael Cruz.

"Trump and National Enquirer nonsense," Martin scoffed. "I'm not involved with Judyth," he added, "haven't been since Fetzer took her under his wing."(9) (He is referring to James Fetzer, a controversial conspiracy theorist who began advocating Judyth's case in 2010. In addition to the Kennedy assassination, Fetzer has promoted numerous conspiracy theories, including some involving 9/11, international Zionist plots, the Sandy Hook massacre, and even the long-rumored "death" of Paul McCartney.)

I asked Martin if he was specifically referring to Judyth's story as nonsense.

"It's all nonse[n]se," Martin said. "Fetzer never met a nonsense theory he couldn't adopt and push through his minions, of which Judyth has unfortunately become one."(10) Later, on a different forum, he added, "The odds are good that Fetzer talked her into it. He is a snake."(11) (I know of no reason to suspect that Fetzer had anything to do with Judyth's claim about Cruz or anything else she says. I asked Martin several times if he had any evidence to back up his suspicions about Fetzer, and he repeatedly declined to respond.)

I asked Martin if, during the course of his work with Judyth, he had ever asked her about the unidentified man in the photographs. After a little prodding, Martin said, "He [Oswald] hired two guys from the employment agency, Dave, as you probably already know. She didn't know them."(12)

This is consistent with what Judyth wrote in her 2010 book, Me & Lee: How I Came to Know, Love and Lose Lee Harvey Oswald: she simply called Charles Steele and the unnamed man "two paid helpers."(13)

In fact, prior to her announcement concerning Rafael Cruz, Judyth had published three books, none of which mentioned "Rafaolo" or "Rafael the Archangel." Why not?

"Nobody ever asked me about him before," she claimed in a Facebook post.(14) But Martin Shackelford says this isn't so. She told him she didn't know the man. (Judyth disputes this.)(15)

In her first book, Lee Harvey Oswald: The True Story of the Accused Assassin of President John F. Kennedy by His Lover, published in 2006 (to which Martin Shackelford contributed the Afterword), Judyth had a slightly different story, writing that Oswald hired "aspiring FBI agents" to help him that day, "so he wouldn't have to worry about their talking about the demonstration later to anybody, or that would be the end of their hopes for an FBI career." Judyth mentioned Steele by name several times, but never named the man she would later identify as Oswald's protector, "Rafael the Archangel."(16)

As the vast majority of Kennedy assassination researchers would likely agree, the question isn't whether Judyth Baker's latest story is true; the question is, what story will she tell next?

Back to Judyth Baker menu

Back to The Men Who Killed Kennedy

Judyth put her extensive training in ways of speeding tumor growth in the service of her government. Her job, which she accepted as a patriotic duty, was to culture the strongest possible strains of lung cancer for eventual transport to medical contacts in Cuba who could arrange for their injection into Castro through a seemingly "innocuous innoculation."

This lung cancer material would appear to kill Castro "naturally," as a heavy cigar smoker might be expected to develop lung cancer. This "assassination by natural causes" would avert a possible confrontation with Russia that could ignite World War III. Judyth really believed this was a duty, considering the horrifying alternative.

The serum in which the cancer cells were placed included a virus that knocks out the immune system, thus enhancing the strength of the already powerful cancer cells. This material -- scraped from the kidney's [sic] of sick monkeys -- was, in fact, the AIDS virus.

Note: This material, used in the polio vaccine and other application, is now the subject of an important new book on the origin of AIDS, Edward Hooper's The River. Judyth knew of its deadly potential and wrote letters to have its use stopped at the same time as she was working with it.

Judyth would later amend the relevant passage in her outline to read, "The serum in which the cancer cells were placed included a virus that knocks out the immune system, thus enhancing the strength of the already powerful cancer cells. This material -- scraped from the kidney's [sic] of sick monkeys -- was, in fact, the PRECURSOR OF THE AIDS virus." (Judyth Vary Baker with Howard Platzman, Ph.D, "Deadly Alliance," alternate draft provided to Robert Vernon, posted by Vernon at alt.assassination.jfk, August 30, 2004.) Judyth also discussed the matter in an email to Howard Platzman, Martin Shackelford, and eleven other recipients, July 25, 2000: "In reality, Dr. Sherman and other Ochsner-sponsored associates such as myself had found the precursor to AIDS. SV-40 and other viruses had been altered, probably using a linear accelerator (location unknown) in order to produce a virus that was to be used to knock out the immune system-- the true precursor of today's AIDS."

Back to Judyth Baker menu

Back to The Men Who Killed Kennedy