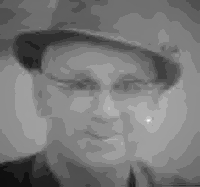 VOLUNTARY STATEMENT. Not Under Arrest Form No. 86

This day at about 12:35 PM I was on the roof of the Terminal Annex Bldg on the NE corner when the presidential motorcade came down Main to Houston, North on Houston and then West on Elm. The cars had proceeded west on Elm and was [sic] just a short distance from the Tripple [sic] underpass, when I saw Gov. Connelly [sic] slump over. I did not see the president as his car had gotten out of my view under the underpass. There was a volley of shots, and then much later, maybe as much as five minutes [sic!] later, another one. I saw one man run towards the passenger cars on the railroad siding after the volley of shots. This man had a white dress shirt, no tie and kahki [sic] colored trousers. His hair appeared to be long and dark and his agility running could be about 35 yrs [sic] of age. He had something in his hand. I couldn't be sure but it may have been a head piece. XXXXXXXXXXXXXXXXXXXXXXX

Back to the Eyewitnesses

Back to JFK Reports and Documents