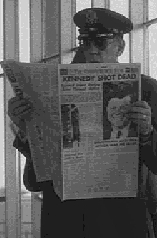 Something under-handed going on Down Under?

X (VOICE OVER)
I was sent by my superior officer, call him Y, to the South Pole as the military escort for a group of international VIPs. This trip had nothing to do with my nine years of work in Special Operations. It was sort of a "paid vacation."

We hear vague ad-lib mutterings on the soundtrack indicating a friendly atmosphere, and we see stock footage of a C-130 transport flying to Antarctica and ice floes on the surface of the sea.

Then, at a New Zealand airport, we see X, in a uniform, at a newsstand reading of Kennedy's assassination. The banner headline of an "Extra" edition of

X (V.O.) (CONT'D)
It wasn't until I was on my way back in New Zealand that I read of the President's murder. That was 2 in the afternoon the next day New Zealand time, but already the papers had the entire history of an unknown 24-year-old man, Oswald -- a studio picture, detailed biographical data, Russian information -- and were pretty sure of the fact he'd killed the President alone, although it took them four more hours to charge him with the murder in Texas. It felt as if, well, a cover story was being put out like we would in a black op.(1)

Oliver Stone takes this account from the real-life inspiration for "X," L. Fletcher Prouty, who encountered this newspaper article in New Zealand at that time.

While a cover story may well have been what the article's contents "felt" like to Prouty, in fact, there was nothing unusual about the article: it contained no information that was not readily available in the morgue of any major newspaper because of stories that had run on Oswald at the time of his defection to the Soviet Union in 1959 and his return to the US in 1962.

Prouty implies something sinister about the timing of the article, that it appeared before Oswald was charged with the President's murder. But Oswald was not formally charged with the assassination until nearly midnight Friday, almost twelve hours after the shooting took place, approximately ten hours after Oswald was arrested, and some eight hours after his name began appearing in the press as the prime suspect.

As early as 3:23 PM Central Standard Time, 10:23 AM New Zealand time, NBC was declaring, "There is little doubt that 24-year old Lee Oswald, the suspect picked up earlier, is the slayer of the Dallas policeman [J. D. Tippit]." At 3:26 PM Central Standard Time, 10:26 AM New Zealand time, NBC announced, "Lee Harvey Oswald, the man picked up in the theater, applied for Russian citizenship on Nov. 1, 1959. He is married to a Russian woman. Dallas Police say the 24-year old Oswald shot and killed Officer J.D. Tippit and might be connected to the assassination of President Kennedy." At 3:54 PM CST, 10:54 AM New Zealand time, NBC noted, "Lee Oswald seems to be the prime suspect in the assassination of John F. Kennedy."

This was three hours before Prouty read about it in the Christchurch Star.

L. Fletcher Prouty's claim is, as the saying goes, "much ado about nothing."

Click here for the actual text
of the Christchurch Star article and more.

1. Oliver Stone and Zachary Sklar, JFK: The Book of the Film (New York: Applause, 1992), pp. 107-08. All quotations are from the shooting script and may vary slightly from the finished motion picture.