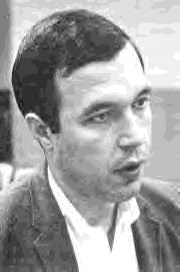 Perry Raymond Russo was New Orleans District Attorney Jim Garrison's prime witness against Clay L. Shaw. The following is a chronological menu of statements, interviews, and testimony of Russo's available on-line, as well as a handful of analyses from NODA insiders. You will need to use your browser's "Back" button to return to this page.

Interview with Will Robinson and Marilyn Colman, 1992

An in-depth analysis of Russo's story