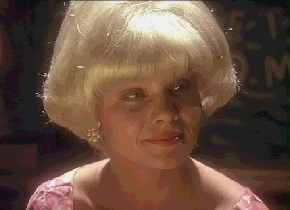 Throughout the 1960s, JFK assassination researchers pored over photographs and motion pictures taken in Dealey Plaza and pondered the identity of a woman standing just south of Elm Street, who appeared to be holding a movie camera and filming the assassination.

Dubbed the "Babushka Lady" for her headgear, the woman's identity was a mystery. She had never identified herself to the authorities and, so far as anyone could tell, had never been questioned. If indeed she was filming that day, the whereabouts and contents of that film were a mystery. 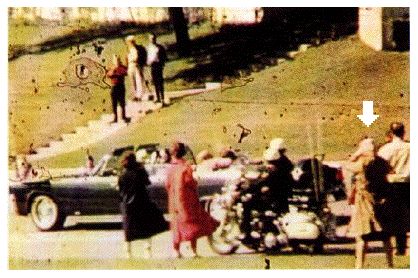 In 1970, however, researcher J. Gary Shaw met Beverly Oliver, a former nightclub singer, who identified herself as the Babushka Lady. She claimed that she had filmed the motorcade at the time of the assassination, and that her film had been confiscated by government agents a few days later. She also told a number of other intriguing stories, to which she added periodically. 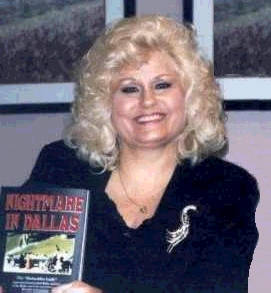 Beverly Oliver in the 1990s

The research community has always been divided over whether Beverly Oliver really is the Babushka Lady. Some who know her insist it is indeed she who is depicted in the numerous photographs and films of the assassination; others claim the Babushka Lady appears to be built differently than Beverly Oliver, as depicted in photographs from that era. Either way, there is no confirmation of her story, only her unsubstantiated and belated claims.

Oliver Stone includes some of Oliver's claims in his movie, most notably her claim to have known Jack Ruby quite well, her assertion that Ruby was a member of the Mafia, and her claim that Ruby had introduced her to two alleged associates of his:

BEVERLY (VOICE OVER)
Oh, yeah. One time I came in, Jack introduces me to these two guys. He said, "Beverly, this is my friend Lee . . ." and I didn't catch the other guy's name. He was a weird-looking guy with those funny little eyebrows [David Ferrie]. The other guy, Lee, didn't make much of an impression either. He wasn't good-looking or nuthin', he didn't look like he had any money, and he was in a bad mood, so I didn't pay him much mind. Well, I might not remember a name, but I always remember a face. When I saw him two weeks later on the television, I screamed, "Oh, my God -- that's him! That's Jack's friend!" I knew right then it had something to do with the Mafia.(1)

Beverly Oliver does indeed claim that Jack Ruby introduced her to Lee Oswald. But more specifically, she states that Ruby said to her, "Beverly, I'd like you to meet my friend Lee Oswald. He's with the CIA." (Alternately, Oliver has stated on other occasions that Ruby introduced Oswald as "Lee Oswald of the CIA." This is noted in one of the two books Oliver Stone based his film upon, Crossfire by Jim Marrs.)(2)

It would appear that Stone changed Oliver's story to omit these details because of the doubt they cast upon her credibility: it's absurd to suggest that one of Stone's sinister conspirators would be introducing Lee Harvey Oswald as a CIA agent; while David Ferrie lived and worked in New Orleans, not Dallas. (No evidence places Ferrie in Dallas during the months preceding the assassination. On the contrary, Ferrie friend Layton Martens told author Gus Russo that between himself and three other friends, "one or more of us were at Dave’s apartment [with Ferrie] practically every night that year."(4)

Stone also has Beverly Oliver claiming that "everybody in those days knew that Jack was with the Mob," when not a single known associate of Ruby's has ever stated this. Quite the opposite, in fact: those who knew Ruby best are the first to dismiss as ridiculous the rumors that Ruby had any substantial connection to organized crime.

If Beverly Oliver's claims had ended here, her credibility would already be a serious issue. But restraint has never been one of Oliver's notable virtues, and her claims have multiplied as time goes by.

Here are some examples of claims made by Beverly Oliver that Oliver Stone omits completely from his movie.

Click here for more on Beverly Oliver and the various claims she has made.

Oliver Stone claims the government has concealed and distorted evidence in the JFK assassination, yet only by concealing and distorting evidence can Oliver Stone present Beverly Oliver as a credible witness.

1. Oliver Stone and Zachary Sklar, JFK: The Book of the Film (New York: Applause, 1992), p. 120. All quotations are from the shooting script and may vary slightly from the finished motion picture.