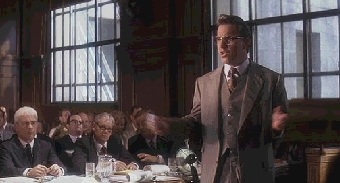 Did a conspiracy take control of the evidence?

. . . 1) [T]he chief pathologist, Commander Humes, by his own admission voluntarily burned his autopsy notes, 2) [the government] never released the autopsy photos to the public, 3) President Johnson ordered the blood-soaked limousine filled with bullet holes and clues to be immediately washed and rebuilt, 4) [the government] sent John Connally's bloody suit right to the cleaners, and 5) when my office finally got a court order to examine President Kennedy's brain in the National Archives in the hopes of finding from what direction the bullets came, we were told by the government the President's brain had disappeared!(1)

Let's examine these charges one by one.

This is true; however, Humes copied them first.

Humes explained to Jeremy Gunn of the Assassination Records Review Board:

. . . [I]n Greenfield Village, there is an old Illinois courthouse where Lincoln used to preside when he was circuit-riding judge. And in that courthouse was a chair that was alleged to be the chair in which Lincoln sat when he was assassinated in Ford's Theater. And the docent, in describing this chair, proudly spoke that here on the back of the chair is the stain of the President's blood. The bullet went through his head. I thought this was the most macabre thing I ever saw in my life. It just made a terrible impression on me.

And when I noticed that these bloodstains were on this document that I had prepared, I said nobody's going to ever get these documents. I'm not going to keep them, and nobody else is ever going to get them.

So I copied them -- and you probably have a copy in my longhand of what I wrote. It's made from the original. And I then burned the original notes in the fireplace of my family room to prevent them from ever falling into the hands of what I consider inappropriate people. And there's been a lot of flak about this, that they're all part of a big conspiracy that I did this because I was involved in I don't know what I was involved [sic]. Ludicrous. That is what I did.(2)

Back to Kevin Costner's JFK monologue:

[The government] never released the autopsy photos to the public . . .

The autopsy materials are under the control of the Kennedy family.

President Johnson ordered the blood-soaked limousine filled with bullet holes and clues to be immediately washed and rebuilt . . .

The limousine was flown to Washington and driven to the Secret Service garage, where it was thoroughly examined and photographed inside and out by several FBI and Secret Service agents. Every bullet fragment was recovered and its position in the limousine noted. The windshield and chrome molding was removed and examined; today they reside in the National Archives. The limousine was then placed in storage, where it remained until the Warren Commission released it. Later, an independent task force -- not President Lyndon Johnson -- recommended the limousine be rebuilt, with such new features as bullet-resistant windows.(3)

It was Nellie (Mrs. John B.) Connally who washed the governor's clothes.(4)

[W]hen my office finally got a court order to examine President Kennedy's brain in the National Archives in the hopes of finding from what direction the bullets came, we were told by the government the President's brain had disappeared!

The House Select Committee reexamining JFK's assassination in the 1970s (HSCA) investigated this issue; click here to read their report on the subject.

After Robert Kennedy's own murder in 1968, the Kennedy family's veil of secrecy was pulled back ever so slightly. Under the aegis of family attorney Burke Marshall, qualified members of the medical establishment, interested in scholarly review, were occasionally granted access to John Kennedy's autopsy materials. One such professional made front-page news in 1972 when he emerged from the National Archives and announced that President Kennedy's brain was missing. The clear implication (not discouraged by this doctor) was that the brain was removed in order to prevent an accurate tracking of the wounds -- tracks that might lead to the infamous grassy knoll.

The doctor's statements further inflamed public opinion about the government and completely misdirected those interested in learning the truth. The truth, in this instance had nothing to do with a conspiracy to kill John Kennedy. It had everything to do with Bobby's unceasing devotion to his brother. But the result was the same -- it continued to feed the fires of domestic-based rumors and theories about possible assassination conspiracies.

In point of fact, staffers at the National Archives had known since October 1966 that the President's brain was missing. However, because they had a good idea of what had happened to it -- a benign explanation, it turns out -- they decided against making it public, fearful of inciting just the kind of public outcry that occurred in 1972. What follows is the actual chronology of events that generated the controversy, compiled using the most recent releases of House Committee interviews and interviews by the author.

On the night of the assassination, autopsist James Humes gave the President's brain and tissue slides to Kennedy's personal physician, Admiral George Burkley. Humes later said, "He (Burkley) told me that the Kennedy family wanted to inter the brain with the President's body. I don't know what happened to the brain, but I do know that Admiral Burkley was an honorable man." Boswell agreed, saying, "I believe that it was buried with the body . . . I personally handed it over to Dr. Burkley and he told me that the family intended to bury it with the body. I believe Admiral Burkley."

Two weeks later, the brain, however, by now fixed in formalin, was re-examined by Humes, and returned to Burkley. Burkley then transferred it for storage to the Secret Service locker at the Executive Office Building, under the custody of Secret Service Agent Robert Bouck. There it remained for the next two and one-half years.

On April 22, 1965, Robert Kennedy sent a letter to Dr. Burkley directing him to transfer the material to JFK's former personal secretary, Evelyn Lincoln, whose office was by now in the National Archives. The letter also stated that Mrs. Lincoln was being instructed that the material was not to be released to anyone without the written permission of Robert Kennedy.

Three days later, Kennedy family attorney Burke Marshall, acting as executor of John Kennedy's estate, relinquished control of the materials to Robert Kennedy. They were then transferred for safekeeping to Mrs. Lincoln in the Archives. An inventory taken at the time indicated that nothing was missing.

One month later, as Mrs. Lincoln later recalled it to the HSCA, Bobby Kennedy called, saying he was sending over his personal secretary, Angela Novello, along with Presidential archivist Herman Kahn and his deputies, to take the trunk away to some undisclosed location. Mrs. Novello was out of town when the HSCA later attempted to interview her. Her attorney told the Committee that she knew nothing about the sequence of events.

In 1994, Mrs. Novello, in a phone interview with the author, said she only recalls moving "some papers," and to the best of her knowledge these papers were still in the Archives. The next question would have been, "Where in the Archives were these 'papers' taken?" At that point, however, Novello abruptly ended the conversation -- again proving that the secretaries of the world are the true keepers of secrets. In Novello's case, she not only functioned as RFK's personal secretary, but after his death, assumed the same function for the "ultimate insider," power attorney Edward Bennett Williams -- the man who represented RFK's longtime nemeses Jimmy Hoffa and Sam Giancana.

According to Lincoln, Bobby's driver and personal assistant, Master Sergeant Joseph Giordano, carried off the trunk. According to Dr. Burkley, "Giordano moved the material to the JFK Library in Boston and knows something about the brain." Giordano, however, told the HSCA that he did not move it, and had "no knowledge" of what happened to it. He suggested that George Dalton, who also worked for Bobby, might know. Dalton was no stranger to performing "secret" missions for the Kennedys -- he had transcribed the Oval Office tapes at Bobby's request. Neither Dalton nor Giordano would respond to the author's requests for an interview.

On November 2, 1965, Public Law 89-318 was enacted. Among other provisions, the law made it clear that the Kennedy autopsy materials were evidence, and that it rightfully belonged to the government. Further, the materials had to be returned within one year of the law's enactment. At that point, Attorney General Ramsey Clark initiated discussions with Kennedy attorneys, who clearly wanted to stall Clark indefinitely.

By the fall of 1966, as the deadline neared, Clark approached Bobby Kennedy directly for the materials. Kennedy was not sympathetic to the government's position. Heated discussions ensued with family lawyer Burke Marshall. On October 29, 1966, an agreement was reached whereby the Kennedys donated the trunk back to the Archives. Deputy Archivist Trudy Peterson witnessed the material's return to the building, and suggested that Bobby, Novello, et al, had removed it from the building in May 1965 to a location Robert Kennedy himself designated.

National Archives General Counsel, Harry Van Cleve, receiving the transferred trunk, took an inventory and became the first person to discover that JFK's brain and other "gross material" were missing. Concluding that the Kennedy family had taken possession of the material, Van Cleve later noted that "we were borrowing trouble in exploring it any further." He further cautioned against approaching Joseph Giordano.

There is very little doubt that Robert Kennedy took control of the "missing" material. This was the finding of the HSCA, as well as many of the Archive employees. The only mystery remaining is exactly how Bobby disposed of the material. And even that mystery is finally starting to fade.

In 1976, RFK's former press aide, Frank Mankiewicz, told HSCA Counsel Blakey he thought that the "President's brain is in the grave. LBJ, Ted, Bobby, and maybe McNamara buried it when the body was transferred. Ted seemed to confirm it later."

JFK's body was, in fact, reinterred in Arlington in March 1967, upon completion of a memorial structure. HSCA Chief Investigator Robert Tanenbaum related to the author a comment that Mankiewicz allegedly made to him in 1978 -- that RFK, in an earlier phone call, said that the brain "is being put back in the coffin. Do not leak this or you'll be in big trouble." Mankiewicz denies saying this, but acknowledges being on guard at the perimeter for the reinterment. Evelyn Lincoln told the Committee that she would continue to investigate the matter on her own.

In 1992, in a final attempt to determine the whereabouts of the material, the author enlisted a close friend who is also a confidante of Mrs. Lincoln to put the question to her. After she told the HSCA that she would conduct further inquiries into the matter, did she indeed learn anything about the disposition of the President's brain? According to the intermediary, Mrs. Lincoln became quiet, looked her friend in the eyes, and simply said, "It's where it belongs."(5)

The JFK 100: The President's Autopsy

1. Oliver Stone and Zachary Sklar, JFK: The Book of the Film (New York: Applause, 1992), p. 159. All quotations are from the shooting script and may vary slightly from the finished motion picture.

The JFK 100: The President's Autopsy