A Change in the Motorcade Route 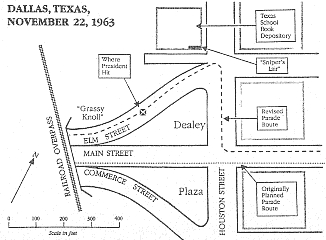 Oliver Stone's JFK makes the claim that conspiratorial forces made a change in the President's Dallas motorcade route in order to get a better shot at him.

LOU [IVON] (VOICE OVER)
Main Street's over there -- the original parade route on the way to the Trade Mart. Too far, right? Impossible shot.

Jim [Garrison] swings the scope up to confront Main Street. Another car is in his sight. Too far.

First of all, had the President's limousine traveled down Main Street instead of Elm, the difference in distance it would have made from the Texas School Book Depository is a matter of yards. It would have made no difference at all with a weapon like Oswald's Mannlicher-Carcano.(2)

That's not the only problem, though: There never was any change in the motorcade route!

The claim, first advanced by conspiracy theorist Joachim Joesten in 1964, was based on a small map of the motorcade route published in the Dallas Morning News the day of the motorcade; it doesn't show the turns from Main Street to Houston Street and from Houston to Elm. So, the thinking went, the conspirators must have made a last-minute change in the route.

The motorcade had to travel down Elm Street to reach the freeway; Main Street didn't offer any access to it. (There was a concrete divider strip in the way.)

1. Oliver Stone and Zachary Sklar, JFK: The Book of the Film (New York: Applause, 1992), p. 128. All quotations are from the shooting script and may vary slightly from the finished motion picture.

2. Oswald's rifle had a maximum range of 2800 meters or 3100 yards (close to two miles), and was considered especially accurate under 300 meters or about 330 yards. (Henry S. Bloomgarden, The Gun: A “Biography” of the Gun That Killed John F. Kennedy [New York: Grossman Publishers, 1975], p. 26.) Had the motorcade traveled down Main Street instead of Elm, it would have placed JFK's limousine only about fifty yards farther away from the Texas School Book Depository at the time of the first bullet strike (at approximately frame 224 of the Abraham Zapruder home movie), and only about forty yards farther away at the time of the head shot (these figures based upon Robert B. Cutler's scale drawing of Dealey Plaza, cf. Richard B. Trask, Pictures of the Pain [Danvers, Mass.: Yeoman Press, 1994], inside front cover).