The Fifth Shot
("Back and to the Left") 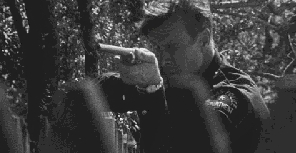 NOTE: The following article contains graphic images of John F. Kennedy's murder. These images are presented for educational purposes only. No disrespect to the late President is intended.

One of the most famous and oft-quoted moments of Oliver Stone's JFK occurs as New Orleans District Attorney Jim Garrison (Kevin Costner) screens the home movie by eyewitness Abraham Zapruder, and describes the shot that fatally struck President John F. Kennedy in the head.

CUT TO the picket fence shooter. We see JFK from his point of view. He fires, and then we see Kennedy in the Zapruder film flying backwards and to his left in a ferocious, conclusive spray of blood and brain tissue. We repeat the shot.

One of the most shocking images ever recorded on film, this vision of the life of John F. Kennedy being forever snuffed out frequently drew audible gasps and murmurs from JFK's theatrical audiences.

Once the shock has passed, Oliver Stone's point is easily made: the President appears to be rocketed back in his seat, seemingly proof that the fatal shot came from in front -- on the grassy knoll, Stone claims.

Appearances can be deceiving, however; there are numerous problems with Stone's thesis. This article will examine the most important issues one by one.

The simple fact is that John F. Kennedy's head did not snap "back and to the left." What the human eye cannot perceive while viewing the Zapruder film is clearly revealed in a frame-by-frame comparison: that between Zapruder frames 312 and 313, the President's head is propelled forward several inches (2.3 inches, according to one study),(2) before strongly snapping backwards, beginning at frame 313 (the first frame in which the results of the bullet strike become visible).

This animated image created by researcher Vincent Van demonstrates the forward movement of the President's head with startling clarity.

President Kennedy struck from behind at Zapruder frames 312-313

As one of Oliver Stone's consultants, longtime researcher Robert Groden, notes in his book, The Killing of a President, the forward movement of the President's head can also be seen in the corresponding frames of the film taken by an eyewitness on the other side of Elm Street, Orville Nix.(3) 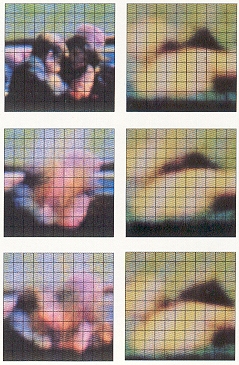 A comparison between the Zapruder and Nix films

Something has caused the President's head to lurch violently forward between frames 312 and 313 of Abraham Zapruder's film, exposed about one-eighteenth of a second apart. A reasonable hypothesis, under the circumstances, would seem to be that the President was struck in the back of the head by a bullet from the rear.

If so, what do we make of the violent snap backwards that begins in frame 314, memorialized so vividly by Oliver Stone in JFK? Stone tells us it's proof of a shot from the front, but forensics experts disagree.

A 1999 documentary, The Secret KGB JFK Assassination Files, brought Robert Groden face to face with several of the most knowledgeable and experienced experts in the field of forensic pathology for a meticulous reconstruction of the assassination in Dealey Plaza. One was Vincent Di Maio, a forensic pathologist for more than forty years and the author of several widely used textbooks, including Gunshot Wounds: Practical Aspects of Firearms, Ballistics, and Forensic Techniques.

When Groden raised the possibility that a "transfer of momentum" from a bullet could be responsible for the sort of violent movement seen in the Zapruder film, Di Maio, without hesitation, said, "No. That's make-believe. That's [something out of] Arnold Schwarzenegger pictures."

This opinion was echoed by Charles S. Petty, the longtime medical examiner of Dallas County, Texas, ranked by his peers as the "Quintessential Forensic Pathologist," who served on the Forensic Pathology Panel of the House Select Committee that reinvestigated the JFK assassination in the 1970s, and who testified in the 1986 London Weekend Television mock trial of Lee Harvey Oswald. When questioned at the mock trial by prosecutor Vincent Bugliosi, Petty testified that the head snap could not have been due to a shot from the front: "Because the head is too heavy, there is too much muscular resistance to movement."

"So the killings that people see on television and in the movies, which is the only type of killings most people ever see," asked Bugliosi, "where the person struck by the bullet very frequently, visibly, and dramatically is propelled backward by the force of the bullets, that's not what actually happens in life when a bullet hits a human being?"

"No, of course not," replied Petty.

Even forensic expert Cyril Wecht, a consultant on Oliver Stone's JFK and long one of the most vociferous critics of the Warren Commission, when asked whether it is a “matter of physics” that a body will move in the same direction as a bullet that strikes it, testified (in the murder trial of Lyle and Erik Menendez) that

when you deal with these things on a purely engineering basis, you're forgetting that the human body has movement at joints and you're forgetting that the human body has movement that is controlled voluntarily or even involuntarily by the parasympathetic nervous system. So, you know, that's the problem in trying to deal with something like this from a purely mechanical engineering or physicist standpoint. Some of the [Newtonian] concepts, indeed are applicable and relevant, but you have to then factor in the biological element, the entire neuromuscular system and so on, all of the voluntary and involuntary reflexive aspects of it....Sir [Isaac] Newton and others just never dealt with those things. They dealt with stationary objects moving in a certain fashion when other objects strike them or are struck by a moving object, and that's just a very different situation.

Another prominent conspiracy theorist, David Mantik, who has been championed as "the most qualified student to ever study the death of JFK" by outspoken conspiracy theory advocate James Fetzer,(4) succinctly states, "I do not believe that a frontal shot, with any reasonable sized rifle or bullet, could produce the observed head snap -- too much energy is required."(5)

Then what is responsible for the head snap?

In the LWT mock trial of Oswald, Dr. Petty explained it this way: "The head snap to the rear, in the view of the panel, was that this was an automatic, involuntary reaction on the part of the President's nerves and muscles. There was a blast inside the head, the nerves were fired off, and the muscles were set into action. The muscles in the back are stronger than the muscles in the front and so therefore the head moved backward."

Professor Ken Rahn of the University of Rhode Island affirms the validity of the panel's analysis, and offers this detailed analysis of the head snap:

This complex motion can be viewed as containing three components. The first is Mrs. Kennedy's, in which she pulls, no doubt reflexively, away from her husband's exploding head by recoiling backward (while straightening up) and to her left. The second is of Mr. Kennedy's right arm and shoulder, which lift upward as his trunk rotates counterclockwise (leftward) about his hip, while his upper torso is moving backward and to his left. This motion continues until his left arm appears to hit the rear seat in about 319, after which he bounces forward. Third is his head, which moves back steadily from 313 to about 320 or 321 (one or two frames after his torso has begun to move forward), all the while rotating counterclockwise faster than his upper torso, until by about 321 we are given a nearly direct view of the rear of his head, which incidentally shows no evidence of the massive blowout so often claimed from the reports of the Parkland medical personnel. The visible damage is clearly to the right occipitoparietal area of the head, or very roughly in the upper part of the right rear half of the head (just where the autopsy physicians placed it). In no way is the damage centered in the rear of the head [as some conspiracy-oriented researchers claim].

The key point here is that this complex rearward movement is not compatible with a direct hit of a bullet from the right front. The head does not snap backward rapidly the way it snapped forward, even though it was perfectly free to do so. Rather the head starts moving backward slowly and gains momentum over several frames. There is no cloud of brain matter to the rear as there was to the front. There is no damage to the left hemisphere of his brain, as there would have to be with a hit from the right. There is no cone of tiny fragments going from right to left in the brain, and no exit wound on the left side. No, the rearward motion was of JFK's entire upper torso, with the head just moving along with the neck. It is a vicious recoil of sorts from the exploding right side of his head. Such a movement could have been caused by a mechanical recoil from the particles that exploded frontward out of his head (the so-called "jet effect"), by some sort of neurological reaction (sometimes called a "neuromuscular spasm"), or a combination of both. The available data strongly suggest that it was indeed a combination of effects, whose detailed contributions will probably never be known with certainty.

For the sake of argument, however, let's assume for a moment that the President's backward movement was the result of a shot from the front. Where would the angle of recoil have placed his assassin?

This question is addressed in the next section.

Click here to view frames of the killing
sequence of the Zapruder film.