Smoke on the Grassy Knoll 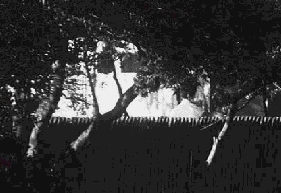 A smoking gun on the grassy knoll?

On the overpass near Dealey Plaza, S. M. Holland, a tan, elderly, leather-faced signal supervisor, points to the picket fence for Jim [Garrison] and Lou [Ivon]. His accent is thick and rural. . . .

HOLLAND
I made it very clear to the Warren people one of the shots came from behind that picket fence. I heard the report and saw the smoke come out about 6 or 8 feet above the ground, right out from under those trees. There is no doubt whatsoever in my mind . . .

FLASHBACK TO the restaged shooting. The smoke hangs under the trees.

CUT TO Richard Dodd on the overpass. He's a cowboy type with a hat and an even thicker accent than Holland.

DODD (pointing)
. . . we, all four of us, all railroad men, standing here, seen about the same thing. The smoke came from behind the hedge -- and a motorcycle policeman dropped his cycle in the street and run up the embankment . . .(1)

Oliver Stone is correct that both S. M. Holland and Richard C. Dodd reported seeing smoke in the area of the grassy knoll, as did their co-workers, James L. Simmons and Clemon Earl Johnson; there is no doubt about that. However, that is not to say they all had "seen about the same thing."

James L. Simmons told the FBI that "he thought he saw exhaust fumes of smoke near the embankment in front of the Texas School Depository Building." (Emphasis added.)(2)

Clemon Earl Johnson told the FBI that he observed "white smoke . . . near the pavilion [between the grassy knoll and the Texas School Book Depository], but he felt that this smoke came from a motorcycle abandoned near the spot by a Dallas policeman."(3)

But Holland and Dodd, if both were living today, they'd almost fight you that they saw smoke coming from out of those bushes. They swore they were looking right at the bushes at the time. You couldn't talk to them. Those guys' heads were set.(4)

I was on hand for the filming of the 1991 film, JFK, where the smoke on the knoll is seen rising. However, when it came time to film the scene, a number of rifles were trotted out, none of which emitted any smoke. Eventually, the special-effects team was brought in. Now the truth can be told: when the film audience sees the "smoke behind the fence" scene, what they are seeing are the effects of a production assistant kneeling behind the fence, armed with a smoke machine.(5)

1. Oliver Stone and Zachary Sklar, JFK: The Book of the Film (New York: Applause, 1992), pp. 121-22. All quotations are from the shooting script and may vary slightly from the finished motion picture.