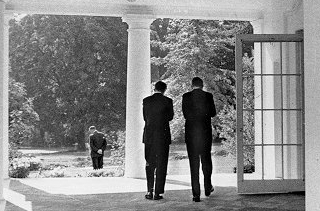 One of the central tenets of Oliver Stone's JFK is that John F. Kennedy intended to withdraw the United States from the conflict in Vietnam during his second term in office.

Stone's evidence for the assertion is delivered via the mystery man "X" (portrayed by Donald Sutherland and based largely on L. Fletcher Prouty), who introduces himself as "one of those secret guys in the Pentagon."(1) He says:

I spent much of September '63 working on the Kennedy plan for getting all US personnel out of Vietnam by the end of '65. This plan was one of the strongest and most important papers issued from the Kennedy White House. Our first 1,000 troops were ordered home for Christmas.

The plan referenced in X's statement is expressed in National Security Action Memorandum (NSAM) 263. (It should be noted that X's real-life inspiration, L. Fletcher Prouty, worked close to people involved in the formulating of this plan, but there is precious little evidence that Prouty himself had anything to do with it.)

In his book, JFK: The CIA, Vietnam, and the Plot to Assassinate John F. Kennedy, Prouty accurately notes that the McGeorge Bundy cover letter that accompanied NSAM 263 states:

At a meeting on October 5, 1963, the President considered the recommendations contained in the report of Secretary McNamara and General Taylor on their mission to South Vietnam.

The President approved the military recommendations contained in Section I B (1-3) of the report, but directed that no formal announcement be made of the implementation of plans to withdraw 1,000 US military personnel by the end of 1963.(2)

Prouty goes on to quote from the relevant section of the McNamara-Taylor report:

IB(2) In accordance with the program to train progressively Vietnamese to take over military functions, the Defense Department should announce in the very near future presently prepared plans to withdraw 1,000 US military personnel by the end of 1963.(3)

"In brief," Prouty writes, "those sections above are the essence of the Kennedy policy that would take men out of Vietnam in 1963 and the bulk of all military personnel out by 1965."(4)

What Prouty's analysis lacks is context.

Compare the items cited by Prouty with this quotation from that same McNamara-Taylor report:

a. Endorsed the basic presentation on Vietnam made by Secretary McNamara and General Taylor.

b. Noted the President's approval of the following statement of US policy which was later released to the press:

In other words, the purported objective of removing a majority of US personnel from Vietnam was contingent upon success in training the South Vietnamese to act in their own defense. This hardly represents a change in policy, as Prouty would have us believe; training the South Vietnamese in this fashion was the reason US military advisors were there in the first place.

Historian Stanley Karnow, one of the acknowledged authorities on the Vietnam War, has a different perspective on NSAM 263 than Prouty. Karnow states:

Early in 1963, South Vietnam's rigid President Ngo Dinh Diem was cracking down on internal dissidents, throwing the country into chaos. Fearing that the turmoil would benefit the Communist insurgents, Kennedy conceived of bringing home one thousand of the sixteen thousand American military advisers as a way of prodding Diem into behaving more leniently. Kennedy's decision was codified in National Security Action Memorandum, or NSAM 263. Its aim was to "indicate our displeasure" with Diem and "create significant uncertainty" in him "as to the future intentions of the United States." Kennedy hoped the scheme, which also scheduled a reduction of the US forces over the next two years, would give the South Vietnamese the chance to strengthen themselves.

This brings us to another contextual factor Prouty fails to take into account, the fact that the US-backed coup against the Diem regime of November 1, 1963, unquestionably altered the political landscape in which all future decisions would be made.

Either way, however, one needs not travel far to obtain evidence that John F. Kennedy had not made a commitment to withdraw the US from Vietnam.

In July of 1963, Kennedy stated, "In my opinion, for us to withdraw from that effort [in Vietnam] would mean a collapse not only of South Vietnam, but Southeast Asia, so we are going to stay there."(6)

On September 2, 1963, Kennedy stated, in an interview with Walter Cronkite:

I don't think that unless a greater effort is made by the Government to win popular support that the war can be won out there. In the final analysis, it is their war. They are the ones who have to win it or lose it. . . . [I]n the final analysis it is the people and the Government [of South Vietnam] itself who have to win or lose this struggle. All we can do is help, and we are making it very clear. But I don't agree with those who say we should withdraw. That would be a great mistake. I know people don't like Americans to be engaged in this kind of an effort. Forty-seven Americans have been killed in combat with the enemy, but this is a very important struggle even though it is far away.

One week later, the President was interviewed by Chet Huntley and David Brinkley. Here is a portion of that interview:

Mr. HUNTLEY. Are we likely to reduce our aid to South Viet-Nam now?

The PRESIDENT. I don't think we think that would be helpful at this time. If you reduce your aid, it is possible you could have some effect upon the government structure there. On the other hand, you might have a situation which could bring about a collapse. Strongly in our mind is what happened in the case of China at the end of World War II, where China was lost, a weak government became increasingly unable to control events. We don't want that.

Mr. BRINKLEY. Mr. President, have you had any reason to doubt this so-called "domino theory," that if South Viet-Nam falls, the rest of Southeast Asia will go behind it?

The PRESIDENT. No, I believe it. I believe it. I think that the struggle is close enough. China is so large, looms so high just beyond the frontiers, that if South Viet-Nam went, it would not only give them an improved geographic position for a guerrilla assault on Malaya but would also give the impression that the wave of the future in Southeast Asia was China and the Communists. So I believe it. . . .

What I am concerned about is that Americans will get impatient and say, because they don't like events in Southeast Asia or they don't like the Government in Saigon, that we should withdraw. That only makes it easy for the Communists. I think we should stay.

We should use our influence in as effective a way as we can, but we should not withdraw.

At the very moment JFK was gunned down, he was only minutes away from delivering a speech at the Trade Mart in Dallas. Here is an excerpt from that undelivered speech:

Our security and strength, in the last analysis, directly depend on the security and strength of others -- and that is why our military and economic assistance plays such a key role in enabling those who live on the periphery of the Communist world to maintain their independence of choice. Our assistance to these nations can be painful, risky and costly -- as is true in Southeast Asia today. But we dare not weary of the task. . . . A successful Communist breakthrough in these areas, necessitating direct United States intervention, would cost us several times as much as our entire foreign aid program -- and might cost us heavily in American lives as well.

About 70 per cent of our military assistance goes to nine key countries located on or near the borders of the Communist bloc -- nine countries confronted directly or indirectly with the threat of Communist aggression -- Viet Nam, Free China, Korea, India, Pakistan, Thailand, Greece, Turkey and Iran. . . . Reducing our efforts to train, equip and assist their armies can only encourage Communist penetration and require in time the increased overseas deployment of American combat forces. And reducing the help needed to bolster these nations that undertake to help defend freedom can have the same disastrous result.

The following year, the slain President's closest advisor and confidant, his brother, Robert F. Kennedy, discussed his brother's feelings on the Vietnam issue in an interview with John Bartlow Martin. "The President . . . had a strong, overwhelming reason for being in Vietnam and [believing] that we should win the war in Vietnam," RFK stated.

MARTIN: What was the overwhelming reason?

MARTIN: What if it did?

KENNEDY: [It would just] have profound effects as far as our position throughout the world, and our position in a rather vital part of the world. Also, it would affect what happened in India, of course, which in turn has an effect on the Middle East. Just, it would have, everybody felt, a very adverse effect. It would have an effect on Indonesia, [with a] hundred million population. All of these countries would be affected by the fall of Vietnam to the Communists, particularly as we had made such a fuss in the United States both under President Eisenhower and President Kennedy about the preservation of the integrity of Vietnam.

MARTIN: There was never any consideration given to pulling out?

While it can be comforting to believe that John F. Kennedy might have succeeded in avoiding the tragic and sordid quagmire that was the Vietnam War, the simple fact is there is no way of knowing what JFK would have done. To insist that the President was intent upon withdrawal is simply not a position justifiable by any of the available evidence.
Copyright © 2001 by David Reitzes

1. Oliver Stone and Zachary Sklar, JFK: The Book of the Film (New York: Applause, 1992), p. 106. All quotations are from the shooting script and may vary slightly from the finished motion picture.

2. Oliver Stone and Zachary Sklar, JFK: The Book of the Film (New York: Applause, 1992), p. 106. All quotations are from the shooting script and may vary slightly from the finished motion picture.

6. Alexander Cockburn, "Cockburn Replies," The Nation, March 9, 1992, reprinted in Oliver Stone and Zachary Sklar, JFK: The Book of the Film (New York: Applause, 1992), p. 106. As Oliver Stone has noted, a number of Kennedy associates are on record as stating that Kennedy intended to withdraw from Vietnam after the 1964 election. One must put such statements in context, and weigh them against all other evidence. To take two sets of contradictory statements and insist that one is true without substantial corroborative evidence is simply not reasonable.