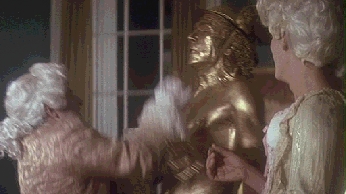 We see the four men in drag, smiling for the flash camera, champagne bottles in hand. Ferrie sniffs some poppers, then shoves a popper in Shaw's face.

(Ferrie grabs Shaw by the hair)


You want this? The only way you get this is do what I say.


F*** you and your rich friends. You're nothing but a rich whore! You're my woman! Get the cat!

In response to his critics, Oliver Stone insisted he was only being faithful to the historical record. "The homosexual connection in JFK was a necessity," he said. ". . . That's why we showed the party, because it's the only room where Perry Russo ran into him. The parties were S&M. There were several witnesses to this."(4)

Stone claimed that the scene was supported by a photograph, allegedly depicting Clay Shaw and David Ferrie together in drag. The photograph, taken in 1949, does not depict any kind of homosexual party -- much less an orgy! -- but a party thrown during Mardi Gras season to benefit New Orleans radio station WDSU. Clay Shaw and another man are wearing mop wigs; the man is not David Ferrie, but rather New Orleans dentist J. Mofield Roberts. (There is no credible evidence that Shaw and Ferrie ever met one another. During his ordeal with Garrison, Shaw once confided to a close friend, Gail Baumgartner, that he actually wished he had met Ferrie. Judging from all he'd heard about the man, Shaw said, "he probably would have found [Ferrie] fascinating.") 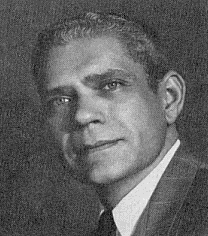 Actor Tommy Lee Jones has described how he learned from a taped interview with one of Clay Shaw's associates that Shaw "had painted himself up like the winged Mercury one Mardi Gras, and I went running . . . to Oliver and said, 'Got to paint myself gold, man,' and he said, 'What?' I finally sold him on the idea."(5)

One could argue whether it would have been ethical to include a scene like this under any circumstances; but given its sole origin in Stone's imagination, it seems particularly difficult to justify.

1. Oliver Stone and Zachary Sklar, JFK: The Book of the Film (New York: Applause, 1992), pp. 81-82. All quotations are from the shooting script and may vary slightly from the finished motion picture.